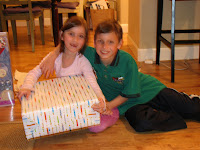 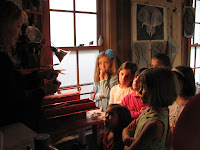 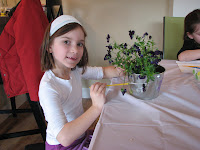 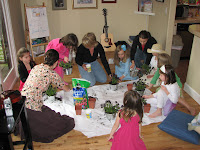 This past week we celebrated Sarah Grace's 7th birthday!  I have to say that as her mother, it is bitter-sweet to watch her grow up.  She has done a lot of that sort of thing over the past year.
When she was six, and we still lived in Matthews, she accepted Christ.  She was so young that Greg and I almost tried to talk her out of it.  That probably sounds absurd, but we really wanted it to be a true acceptance of Jesus and not something she felt pushed or compelled to do by anyone other than the Holy Spirit Himself.  She is quite spiritually sensitive.  She loves her God openly and without apology.  She loves to go into her room and turn up the praise music and sing along.  One could learn  a lot about the joy of worship from this little child.  Her sunday school teacher describes her as an "old soul".
A lot of maturing has happened for Sarah Grace this past year.  She endured a move across the country from the only home she has ever remembered to a place that was new to all of us.  She released her dearest friends and embraced the adventure.   She has spent the past 7 months living apart from most of her earthly treasures.  She has but a few toys we were able to bring with us in the van.   Her clothes are piled into a crate-like shelving structure in her closet as she has no real furniture in her room other than a bed.  Making friends has happened slowly, and she has been patient.  She has gone to various churches that we have tried out and has made the best out of each experience.  She has been open to all of the new, while at times deeply missing the old.  She goes to bed happy and wakes up happy.  She never claims hardship and she never complains.
In the past several months and weeks she has learned to play basketball, read English and music, do scales on her violin, ski (sort of), be a caring, generous, and selfless playmate to a 3 year old, countless scriptures, and how to cook with her mama.  She stopped sucking her thumb one day because her Daddy told her it was time and she agreed, so she just stopped.  She got stuck on top of Mt. Hood skiing with Aunt Kirsten.  It took them an hour and a half to get down with no help from anyone.  She never cried, complained or gave up.  She even ended up being an encouragement to Aunt Kirsten during their exhausting and at times harrowing descent.  She and Samuel had to get blood drawn at the doctor's office during a check-up.  Sarah Grace volunteered to go first.  She held out her relaxed arm, turned her head and pressed her lips together as tears welled a bit in her lower eyelids, but never fell.  I really can't think of many people I know that show greater determination and will power than this little girl.
She gleefully skipped into the hairdresser's salon to get 14" of her hair wacked off so she could send it to Lock's of Love.   When the hair came off, she instantly looked so much older.  It occured to me that her new physical appearance matches up with the growing person she is on the inside.
Sarah Grace is a joy to all of us.  Samuel loves her so much, I think he would give her his right arm if she asked for or needed it.   They are the best of friends.  Her Daddy is truly her prince.  He showers her with affection and tender guidance.  He encourages her in all her endeavors.  He protects her from those things in this world that would steal her innocence and mar her sweet childhood.  He shows her what it means to be honored and cherished.
We are very blessed indeed.
So as much as Greg and I would like to repeat "6", we must move on with "7".
Happy birthday Peach!
Mama and Daddy love you!
p.s.  The pics are from her birthday party where we planted pansies in tins and then painted the tins and then went to our neighbor Holly's house who is a sculptor.  The girls got to see Holly's studio and her work and hear about how she does her work.  We then came back for a tea party!  And the music selected for this blog are some of SG's favorites.  :)
Posted by Kara at 9:38 AM 5 comments: