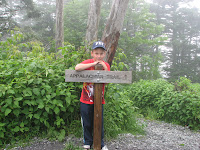 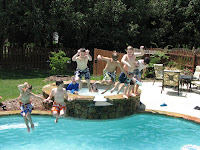 Shortly after our move, we started preparing for our yearly getaway to Gatlinburg, TN. On the front end of this trip we planned to celebrate Samuel's 9th birthday at Dale and Kirsten's house in Charlotte. We flew into Charlotte on July 3rd and were able to spend a morning with Dale, Kirsten and the kids before they headed off to Florida and left us in charge of their house and pool for the weekend. Greg's mom, dad and grandmother joined us there and helped us plan and execute a great party on the 4th to celebrate Samuel's 9 years. Samuel had been bursting with the anticipation of seeing his Charlotte friends again. Getting to spend the day with them was truly the greatest present he could have gotten.

The weather was beautiful and almost everyone on our guest list was able to make it. The kids needed no more than the pool and each other to have a great time. It was great getting to spend some time with old friends. Because of Kirsten and Dale's hospitality we had everything we needed and all the comforts of home.

We are very proud of our boy. It is such a joy to watch him grow physically as well as spiritually. Since I am writing this well after his birthday occurred....yes, I am attempting to catch-up on some blogging...I will share with you what I am sure will become a favorite 'Samuel story' for us.

A bit of background:

Samuel received a wallet from his dear friend Hudson in Matthews this past birthday. Hudson put a bit of cash in the wallet. That added to the other money friends and family had given him for his birthday made quite a healthy stash for a boy of nine! While we were in Gatlinburg, Samuel tried to pay our trolley fares. He got to the front of the line of our family and as he approached the trolley driver, with his back to the rest of us, proceeded to whip out his wallet, turn his head to the side with his left hand raised and announced, “I got it.”.

Samuel is an extraordinarily generous person. I can't even tell you how many times he has offered to pay for something his sister wanted...even offering up his whole allowance on at least two known occasions. He is incredibly sensitive to the needs and wants of others. He isn't just generous with his money. Before he takes a bite of whatever delectable treat he might get his hands on from time to time, his first concern is whether or not I can have it (if it's gluten-free). He wants to be able to share his treats with me. He's not stingy either....if I asked for his whole ice-cream cone I know he'd give it to me. (I have no plans to test this theory but feel sure of it nonetheless).

A couple of weeks ago, when Elaine and Julianna were visiting, we took a trip downtown to the Chinese Gardens. Afterwards we got dinner at Baja Fresh just around the corner from the famous Powell's Book Store. There was a weary and worn looking homeless girl with her dog sitting outside Powell's with a sign in hand explaining her worldly troubles. Her dog was really cute.....scruffy but totally cute. Elaine, Julianna and Sarah Grace stopped to admire the dog. Greg and I were just trying to usher everyone towards the restaurant. I looked back to see that the others were finally on their way, but one lingered. I saw the unmistakable profile of my son in his beloved FBI baseball cap standing over the girl. I watched him pull his wallet from his pocket and hand her a dollar from it. It was just a dollar and yet it's significance trumped anything the rest of us had thought to do for her. When he joined us we naturally praised him for his generosity. He simply explained that he had read her sign and she had troubles. She was hungry.

She came into the Baja Fresh we were eating at and bought a drink (they had 99 cent drinks) after washing her hair in the restaurant's bathroom. Samuel was overjoyed to think that he had been able to pay for her drink. We passed her again as we walked back to the van past Powell's. She thanked us and spoke of how kind and generous our children are.

I left that scene reflecting on yet another lesson that one of my kids was teaching me. 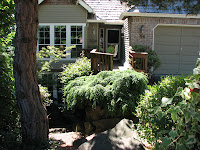 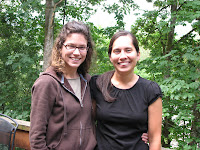 We ended up living at Maple Street for almost 9 months. Our temporary accommodations were cozy and comfortable, but we were eager to receive our household goods and establish a greater sense of normalcy in a more “permanent” home. Most of you know that our situation remains uncertain, so we were fortunate to find a wonderful home in Lake Oswego that we are renting for now. The United van pulled up to our new house on June 15th. I started to feel quite overwhelmed when the movers started bringing all the furniture and boxes into the house. It was chaos. I was so grateful that I had help!

Tobitha, Aislyn and Benjamin arrived the night before on the 14th. They came all the way from Orlando, Florida for the express purpose of getting us settled in the new house! Now that's a true-blue friend. Those of you that have the pleasure of knowing Tobitha, know that she doesn't mess around. Anything she starts, she finishes. She doesn't get emotionally attached to “stuff”, and she does not get easily side-tracked. She was exactly who we needed to help us get the job done. You would have been amazed to see all that we accomplished by the time she and the kids left on Saturday. Within two-weeks time, we were basically settled. You will have to trust me on how impressive that is based on the enormity of the task we faced.

I am so incredibly thankful for the time I got to spend with my sweet Tobitha. I had been longing to see her face to face for some time. As it is with so many that I love, the distance can be so hard. We worked diligently during the days and tried to find some time for relaxing in the evenings. I regret that we didn't show her and the kids any of Portland (we stayed very focused), but I enjoyed every minute with them nonetheless. Samuel and Sarah Grace had oodles of fun with their “cousins”, Aislyn and Benjamin. Despite hanging around the house for most of the week, they never lacked for things to do and enjoyed simply just being together.

One of my new and dear Portland friends, Lorri, spent moving day with us as well. She busily helped us unpack the kitchen, among other things, while her four children just naturally blended into the mix with the other kids. The kids were all great and got along famously. It was a beautiful day and they were able to all play outside for the most part. I had to chuckle later when one of our new neighbors commented on how we were the talk of the street with all those children running around. I'm sure they were thinking their quiet street would never be the same! :)

A lot more has happened since then, so I will follow this blog post with another one shortly. I am currently on a plane headed from Charlotte to San Francisco, so I actually have some time to write!