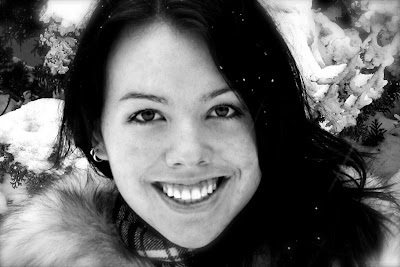 It was a cold, rainy night in November. I had been waiting awhile in the dimly lit restaurant. She was running late. We had not met before, but I knew it when she walked in. Dressed in black from head to toe, her rain slickened hair was tightly secured in a pony tail. Wide, bright eyes framed with dark lashes lit her face and her smile warmed the room. After an embrace of salutation, she sat next to me at the table. We ordered our food, but both of us ended up only taking a few obligatory bites. We spent the next three hours talking about faith in Christ.

I had been told she was a seeker, but it was pretty clear to me that night that she'd already been found. She spoke of her faith in Jesus. Her faith. She already owned it. She was shy about calling herself a Christian, like maybe she wasn't worthy of such a title. I told her that God wants us to be assured of our salvation. It is by grace through faith that we are saved....not of ourselves. If she has faith in Jesus, I told her, then God gave it to her and He's not going to take that away. I asked her if she knew the moment she realized the Truth, the moment her faith in Christ was born. She wasn't sure. I told her she could pray to ask Jesus to come into her life, forgive her of her sins and help her to follow Him for the rest of her life. I explained how this would become her 'stake in the ground'. When troubles and doubts assail her in the future, as they do all believers, she would have that moment to point back to... the moment she claimed her faith.

The next day, November 21, 2009, she prayed to accept Jesus. She put her stake in the ground. Growing up mainly in the Pacific Northwest, born to loving, but non-believing parents there is no worldly explanation why this girl came to faith in Christ. She was 19 years old, living in America, and had never heard the gospel. The first real contact she had with scripture was during a Literature class in school. She told me how she was stunned by the scriptures that were read in that class. She knew she wanted to investigate the Christian faith more, but she knew no Christians. She had questions but no one to ask. Not until she met Caleb.

Caleb is a guitarist at our church back in North Carolina. He is an incredibly gifted musician who keeps mostly to himself, a sort of dark and brooding, artsy type of guy that always wears black T-shirts and jeans like Simon Cowell. I often take liberties with people that I probably ought not to. Caleb was no exception. On Sunday mornings, when he would walk past me on the way to his guitar, I would greet him with, “Good morning Sunshine!”, just loud enough for him to hear. Usually there was no response other than the occasional sideways steely glance and a jerk of his head that would fan his shoulder length hair away from his face. I thought it was funny. I always wondered what type of girl he'd end up with.

Lauren met Caleb in some sort of cartooning forum online. After learning he was a believer, Lauren started asking lots of questions. Over many months Caleb shared the gospel truth with her. I don't know the details of all that transpired between Lauren and Caleb over that time. I only know that by the time I met her (at the request of my friend Jodie, Caleb's mom, who doesn't believe in coincidence), the seed had been planted and thoroughly watered. God had done His work and then let me watch the culmination of it. It was like walking into a casino and finding $1 on the floor and putting that $1 in the slot machine, pulling the lever and having the whole jackpot fall into your lap! What are the odds?

She's like a sponge, wanting to soak up all the life in Christ she can. “I have so much to learn, I can't wait to learn it”, she once told me. I had the privilege of walking beside Lauren through her first days of being a Christian. We experienced quite a bit together in a short amount of time. There were joyful, happy days and there were some really tough times too. And that's life.

There's a saying, “you cannot stay and go with God”. It's really true. 'Going' means different things for different people. For Lauren, it meant literally going someplace new and far. Our heroine's story continues now in the great state of North Carolina. There will be times of peace and smooth sailing. There will be rough, rocky patches too. The Body of Christ has received her. As she links arms with other sons and daughters of the King, she will learn to daily trust the One who bought her freedom with His blood.

She's born again, a new creation, a heart of stone turned to flesh, once dead in sin now alive in Christ. All by grace. The angels rejoice!

Can you sing with her?

LYMYWY (Love you, Miss you, Want you),